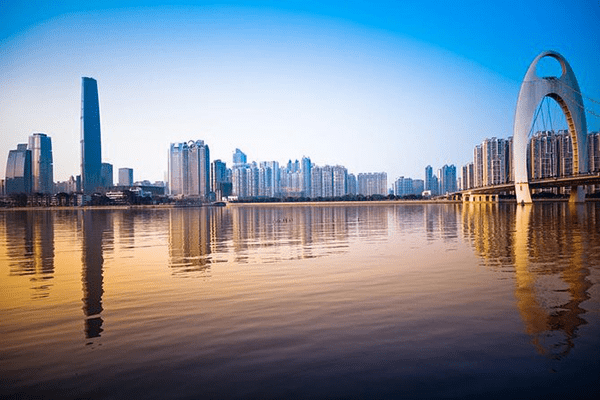 Guangzhou is the largest city in the world’s largest conurbation (the Pearl River Delta: pop. 65 million).

A leading commercial and industrial city, it has 11 districts under its jurisdiction with a total area of 7,434 square km (2,870 sq mi).

Once known as Canton, Guangzhou was the only Chinese port accessible to foreign traders between 1760 and 1842 in the Qing Dynasty. It rose to prominence first as a trade port, then as a manufacturing base. More recently, business people by the hundreds of thousands have come for the biannual Canton Fair (China’s largest trade fair), increasingly touring the city sites such as the Canton Tower.

Guangzhou is a busy trade center with hundreds of thousands of visitors from all over the world (pre-COVID-19), and it is perhaps China’s most multi-national city. Though this makes it more complex to control than other cities in China, in comparison with cities of a similar size in the world, the safety of Guangzhou must be among the top.

Guangzhou has a humid subtropical climate with plenty of sunshine and rainfall and no snow. Summers are long, humid, and hot, and winters are short, mild, and sunny.
From May to October daytime temperatures often exceed 30°C (86°F). Even in the coolest time, from December to February, the temperature still climbs to around 20°C (68°F) and seldom drops under 10°C (50°F) at night.

Tianhe - the city's business district includes the Zhujiang New Town development and the sprawling urban village of Shipai. Tianhe is the city's transportation hub and highlights include the Guangzhou Opera House, Guangzhou Library, and Guangdong Museum.

Yuexiu - centered around the Zhongshan 6th Road area, Yuexiu is home to many of the city's tourist attractions such as the Guangzhou Museum, Canton Orchid Garden, Temple of Six Banyan Trees, Mausoleum of Nanyue King, and the Beijing Lu (Beijing Road) Shopping District.

Haizhu - this district lies south of the Pearl River and is home to the fabulous Canton Tower. The former industrial sector is now filled with elegant businesses and homes, and its Pazhou area hosts the Canton Fair each spring and fall.

How to Get Around Guangzhou

Public Transportation - the Guangzhou subway system has nine lines at present. Line 1 is the best option for visitors as it covers 80 percent of the city's attractions. Lines are color coded and station names are given in English as well as Mandarin. Buy a single fare ticket, or purchase the Ling Nan Tong - Yang Cheng Tong transportation card, which can also be used on buses and ferries.

Taxi - taxis are relatively cheap in Guangzhou, so they're a popular alternative for visitors. Be sure to ask someone to write down your destination in Mandarin as few drivers understand English.

Car - driving can be difficult for visitors who aren't used to Guangzhou's heavy traffic and local road rules. Consider booking a local driver for your stay, and rent a car from leading outlets like Avis and Hertz.

Shop for clothing, accessories and electronics at the city's largest mall, Grandview Mall (Zhengjia Plaza) in the Tianhe district, or spend the day browsing the vast range of stores on Beijing Lu Pedestrian Street. For a more authentic experience, explore some of Guangzhou's bustling street markets such as Xiguan Antiques Market or Haiyin Shopping District.

Find fresh produce, seafood, meats, and dry goods at one of the large ParknShop stores that are dotted around the city, or try Jusco stores for fruit, vegetables, and Japanese foods. Other popular stores include Carrefour, Ole, and Taste.

Guangzhou is considered as the paradise for gourmands in south China. Its dish represents well the Cantonese Cuisine, which is one among the most famous eight Chinese cuisines. A large amount of time-honored restaurants and quality new restaurants serve various authentic local dishes, snacks and drinks. The most popular restaurants gather around the old city area, including the Dongshan District, Yuexiu District and Liwan District. Panfu Road, West Jiangnan Road and East Huifu Road are recommended food streets for tourists to feel the local eating customs such as Yam Cha (Drinking Tea), having various kinds of soup or delicious Sampan Porridge.