The year of independence

PurePower Technologies has spent the last 12 months reinventing itself but boss Jerry Sweetland says it is facing the future with confidence – as well as a new reman turbo offering. Denise Rondini reports.

While it did not start out as a remanufacturer, PurePower Technologies has created a reman programme in order to be able to complement its new components, explains Jerry Sweetland, president and CEO. It’s a complex story (see bottom of the article): but in its first year as an independent operation, Sweetland says the company successfully separated itself from parent company Navstar while at the same time wining its first contract to a non-Navistar company by inking a deal with Standard Motor Products to distribute injector products. Sweetland says the company has spent the last year reinventing itself: “We have a very clear expertise in precision manufacturing as it relates to diesel fuel systems. We have a background in turbochargers as well as emissions control devices — complex engine components.” He adds: “We are applying that a little bit more aggressively to the remanufacturing market to take on more customers and product diversification.”

Sweetland says that while the reman programme was created to complement its new components, the company quickly understood the size and scope of what reman is: “We realised it is a pretty good business to be in and that being an OE in reman had its advantages.” Having access to cores and all replacement components also makes things easier, he adds. The reman operation started in 2006 and at that time represented only a single digit per cent of the company’s sales. “Fast forward to 2016 and we are at a point where about 85% of our sales are in service and - of that 85% - about 85% is remanufactured components,” he says. “Reman is a pretty dominant portion of our annual sales. And as you look at our future trend and fast forward to 2020 that number for remanufacturing almost increases to 85% to 90% of total sales.” 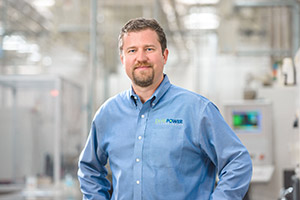 “Reman is a pretty dominant portion of our annual sales. And as you look at our future trend and fast forward to 2020 that number for remanufacturing almost increases to 85% to 90% of total sales.”

Turbocharged expansion
Recently, PurePower announced that it was expanding its line of remanufactured turbochargers to include turbos for all makes of vehicles. This is possible, Sweetland believes, because the company “has all the significant tools in order to be able to validate and launch this turbo project”. The company has invested in a hot gas test stand, precision assembly and end-of-line testing. Its four dominant products are diesel fuel injectors, turbochargers, EGR valves and diesel fuel pumps, with all the manufacturing done in Blythewood, South Carolina.

“We have a small facility which we use to receive and do some rough teardown of cores,” he explains. Once that is done, they are brought to the main plant “where we do the sorting, inspection and the actual machine operations in order to get the components in position to be assembled”. Five miles away is the company’s Columbia Technical Center where validation testing is completed. “This is a unique feature for a remanufacturing company of our size,” he says. The 40,000 square foot research and development facility is equipped with two dynamometers, a hot gas test stand, performance benches and durability benches. “We also do prototype analysis, failure analysis and all our warranty work too,” he adds.

Heritage and skill
Sweetland says that PurePower Technologies “is very much an OE company that really is applying our heritage and our skill set from the OE world to really enhance remanufacturing”. He says that the company’s quality rating is in single digits when it comes to a parts-per-million (ppm) defect rate: “Last year we finished at 5.6 ppm which includes all our remanufactured products as well as our virgin products. When you produce and sell over a million products and are able to keep that defect rate low, especially given the complexity of the products that we deal with, is something we are very proud of.”

Speaking about turbocharging remanufacturing, Sweetland says the company knows that turbochargers present similar difficulties as diesel fuel injectors: “They are generally expensive, difficult to remanufacture properly especially while keeping quality levels high or equal to OEM new.” However, he feels the company has the skills need to do it. “Plus we know that there is definitely a market need based on feedback we got from market studies and from our current customers.”

Quality level
Sweetland saw the need for remanufactured products with a high quality level and felt that meshed with PurePower’s “set of tools, both engineering-based expertise as well as physical hardware in the form of precision assembly and tests, machining know-how and hot gas test. All that combined really made an entry point into the turbocharger remanufacturing world pretty clear to us.” PurePower will start remanufacturing products that complement its fuel injector products in order to be able to pair the two together. “However, we are already getting a lot of interest and a lot of activity behind other products that we will develop in parallel. We are starting with a direct set of turbochargers and the expanding into all makes for customer specific applications.”

Production goals are modest at 10,000 units for 2017 with an expansion to more than 50,000 in the next four years. “With capacity and based on market response and customer response we have the ability to ramp that up and take it north of 100,000 units,” Sweetland says. The firm has the capacity to produce 200,000 turbochargers a year, but he warns: “We want to be careful and cautious to make sure that we are launching a quality product first and foremost. We feel our reputation is really based on our ability to remanufacture complex engine assemblies by applying OEM quality standards.”

No mistakes
The company is keen on maintaining its single digit ppm rating “so we don’t want to ramp up too quickly and potentially make a mistake in the process - we are taking a conservative approach to make sure our first launches are flawless and very successful”. Sweetland acknowledges that there are challenges ahead. “There are always challenges. We are not naïve to think that we are going to ‘build it and they will come’. We know there are current competitors in the market but we know we have some opportunities to challenge those competitors on a quality level.” The company intends to take market share from existing companies and seeing new opportunities developing as turbochargers reach their warranty limits and newer engines start to be better targets for remanufacturing. “Remanufacturing is at the heart of what we do and we want to be world class,” Sweetland says. “We have made a pretty large commitment in order to be able to do product diversification and it is all going to come within the remanufacturing space.”

As part of that commitment PurePower announced that it is adding 80 jobs. According to Sweetland all of them are in the company’s reman operation. “It is a mix of engineering positions, technicians and what we call manufacturing associates.” About 80% of the positions have already been filled. Looking toward the short-term, Sweetland says: “We will continue to add different product lines to both diesel fuel injection and turbochargers. We expect that more contracts will be won for EGRs as well as pump applications all centring around highly complex diesel engine components.” Regardless of what the future brings Sweetland says that PurePower sees its growth models within remanufacturing and in precision engine assemblies with a clear nod toward high quality products. He concludes: “We feel very confident about the future.”