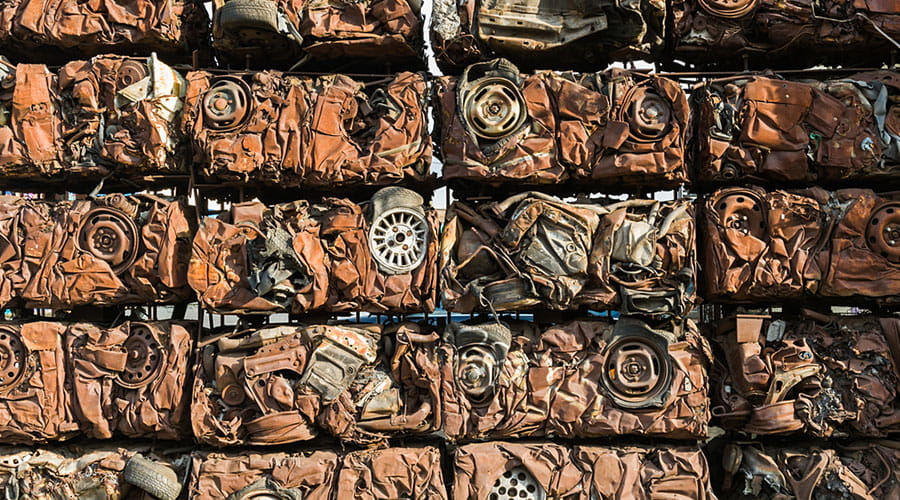 We saw in my last post how end-of-life (EoL) policies drive the auto industry towards recycling. In this post, we will not only look at what those EoL policies are, but also leaf through some of the policies related to the production phase, point of sale, and use phase and see how these policy levers create an impact as the product goes through its journey from manufacturing all the way to ultimate recycling. It is a slightly longer read, so please bear with me.

While doing my research, I came across an interesting study conducted by Walls (2006) that looked at the impacts of American recycling policy instruments on production, design and recycling stages. I could not think of a better way to illustrate the various policy impacts within the EU context, so I adapted the table format from the Walls study.

The first column lists down the studied policy levers, and the columns two through six, list down the various stages in a product’s lifecycle. I have explained the various terms in the glossary just after the table. 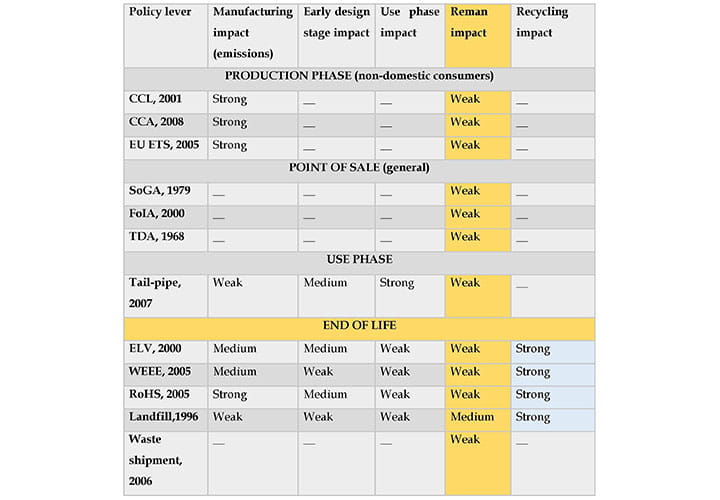 The Climate Change Levy, Climate Change Act and the EU ETS primarily impact the production phase and are related to the carbon emissions. Most non-domestic users of energy (manufacturing, energy intensive businesses etc.) within the UK adhere to these three policy levers for the use of fossil fuels. Even though they do not have any direct bearing on the use or post-use phase, they do create an indirect impact on remanufacturing.

The Sales of Goods Act impacts remanufacturing indirectly to the extent that a manufacturer is responsible for making quality and reliable products. Since this act affects the retailer who sells the product, the cheap perception associated with reman parts is not an incentive for retailer to sell reman parts. Further, if there is any defect in a reman part, then it is the retailer who is responsible. Hence, a negative impact on remanufacturing from a retailer’s viewpoint.

The Trade Descriptions Act is primarily set up for the protection of consumers so that they are not misled by claims that may be not present in a product or are present but are not presented to the customer in a correct manner. This is especially true in the case of in-warranty replacements, where VM dealers replace in-warranty failures with reman parts instead of new parts after 3 months into the warranty (may vary for different VM’s). While this significantly reduces the warranty costs for the VM, the customer is not made aware at the point of warranty replacement. This could have serious implications, if the customer later finds out that a particular part was replaced by a remanufactured part and not a new part, which can damage the reputations of not only the dealer but also the VM and the remanufacturing industry in general. This drawback was also pointed out during the interviews I conducted with some of the dealers.

End-of-life Vehicles Act of 2000 directive’s main aim is to increase the re-use and recovery (via recycling, regeneration etc.) of vehicles those reach their end of life. The rate of re-use and recovery should be 95% in average weight per vehicle (Directive 2000/53/EC). The ELV act has no mention of remanufacturing specifically and can also cause confusion since it is not explicit in naming which forms of recovery are required.

Waste Electrical and Electronics Equipment (WEEE) Directive of 2002 and Restriction of Hazardous Substances (RoHS) Directive of 2003: The WEEE and RoHS directives were established to address the problems of complex materials and components that go into manufacturing the electrical and electronic equipment. At a high level, WEEE directive achieves three main goals:

Other research has shown that WEEE directive has led to increased recycling rates and reduced waste disposal, supporting the ‘push towards recycling’. The research also showed that there is no data available demonstrating that WEEE has caused any effect on manufacturers to adopt strategies that consider environment during the design stage.

This can lead WEEE directive to cause more and more equipment to be scrapped well before its time and even though the directive encourages re-use, it is difficult to quantify the re-use levels (as the original producer in most cases will not have the visibility at that point) and thus is difficult to measure those levels in favor of overall recovery targets laid down by other directives.

The Landfill tax does impact remanufacturing in a positive way only partly, as the tax on landfill causes the manufacturer to look for ways of reducing the landfill and remanufacturing is one of the options to avoid the tax.

EU Waste Shipment Regulation of 2006 requires no waste to be transported to non-OECD countries and outside of EU. While this is a right regulation, cores or the old units are often taken as waste and fall in this regulation creating a barrier to ship remanufactured parts internationally. The regulation also does not allow access to cores from other countries as they get categorised as waste. In my research, I found this to be a constant challenge that OEM’s have to face resulting from this regulation.

It is well understood that recycling is an additional cost activity for manufacturers and hence governments provide recycling discounts (which can be termed as perverse incentives) to manufacturers. Referring to Walter Stahel’s work in the late nineties, he argued that shorter the reverse loop, higher the gains, both in terms of energy and material usage. Re-use and remanufacture have shorter loops than recycling and yet recycling is the most pervasive activity which is not only costly but also highly energy intensive. All the policies that we saw in this post have weak impact on remanufacturing with the EoL policies strongly skewed towards recycling. This is due to the incentives and policy instruments that have caused such a high uptake of recycling. Thus, a similar approach to remanufacturing may also yield similar results.

The analyzed EU directives drawn out in the table 1 don’t have favorable impacts on remanufacturing and as shown in figure 1 there is no law or directive that categorically addresses the material and resource savings that remanufacturing brings by way of avoided virgin material and energy usage.

So, will a policy change that incorporates remanufacturing be the solution? If so, what kind of policy and at what phase of the product’s lifecycle should it fall under? Does a remanufacturing policy have to come at the expense of recycling? We will look at some of these questions and try and gain some more understanding along with some recommendations based upon my research. All of this in my 3rd and final post of this series.