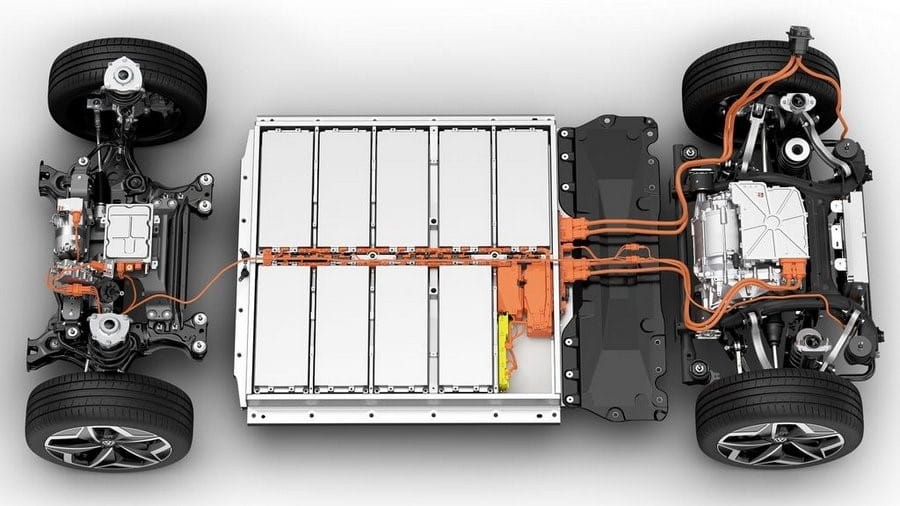 Historically speaking, electrification has disrupted the remanufacturing industry before but by adapting, the industry has always managed to develop and survive. I will not dwell too much on the changes to and advances of the electrical automotive industry but will focus more on the repercussions and challenges facing remanufacturing.

However, as a starting point, I would like to talk briefly about the reasons for the changes and what they mean for the automotive industry. The UN Paris COP 21 conference in December 2015 enshrined in its agreement a limitation of 1.5 degrees centigrade on any further increase in global temperature and committed to achieving the target of CO₂e-neutrality by 2050. To support these objectives the European Commission proposed the so-called Green Deal or “Fit for 55” which aims to reduce fossil emissions by 55%, compared to those of 1990, by the year 2030.

The EU Commission proposal implies (in my view) that its objective can only be met by banning petrol and diesel cars and allowing only electric cars to enter the market. This could be practically achieved by implementing an EU directive limiting CO2 emissions to 59 gr/km which most combustion engines will not be able to meet. For diesel cars, the situation could be even worse. It may be very difficult to meet the EU 7 standard, currently in preparation and expected to be implemented in 2025.

Banning cars equipped with combustion engines from the market is like cutting off the lifeblood of many traditional automotive remanufacturers.

I have been very intrigued by these developments and have decided to look at it from the remanufacturer’s perspective. I will analyse the facts, propose some conclusions and ideally if I may, make some recommendations.

Evolution of sales and parc of electrical cars in Europe

The registration (sales) of electric vehicles has displayed such dynamic development that its progression is difficult to follow or forecast. Registrations have doubled over the last 12 months and will probably double (if not triple) again before 2025. Countries like Norway have already achieved 70% of total car sales!

(NB. I would like to mention at this stage that when I refer to electric cars, I mean pure electric vehicles and not hybrid vehicles.)

To form a view on how remanufacturing will be affected in the next 15 years it is important to look at the level of registrations (sales) by different vehicle categories. The above graph shows quite clearly that sales of electric cars are expected to increase rather dramatically. It is, of course, only a forecast; the reality may be different, one way or the other. 2030 is a milestone for which many institutions, OEMs and governments have forecast (or committed) numbers which I have averaged at 50%. It may be a conservative figure because some institutions suggest an even higher number. The EU Commission has set the year 2035 as its target date for 100% take-up of emissions-free cars. That may be the point at which market demand has already completely changed in favour of electric cars or when, due to the emission standard decided by the EU commission, the registration of combustion engines will no longer be possible. Whatever the actual year, sooner or later combustion engines will be phased out. 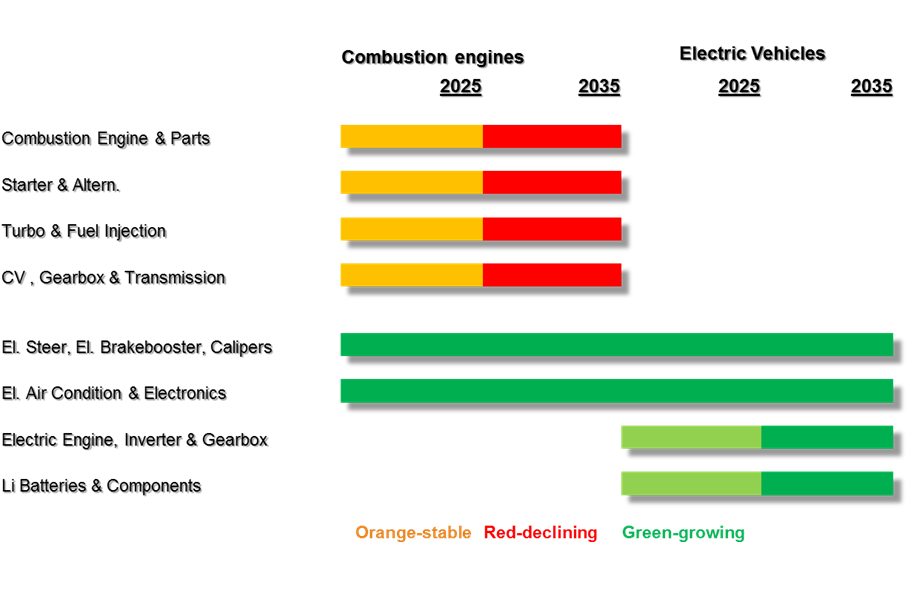 Will automotive remanufacturing business be disrupted?

For remanufacturers of combustion engines and their ancillary components it will mean serious disruption and, over time, a loss of business. Not only engines but also starters, turbos, fuel injection, transmission etc. will decline and ultimately be phased out.

The next question is, will those OE manufacturers who lose out in the production of new cars, develop aftermarket for new manufactured products just to maximise their capacity – and will this be at the expense of remanufacturing? We hope not!

In contrast, areas like steering, braking, air-conditioning etc. will remain stable although they may also undergo a technical evolution.

Regarding electric car components like batteries, electrical machines, loaders, inverters, electronics etc., remanufacturing will benefit but it will take some time until demand picks up. 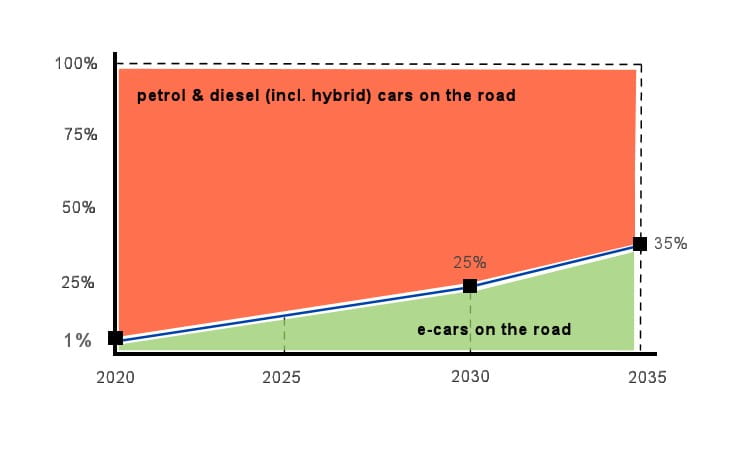 In remanufacturing, the great advantage has always been that business, technologically speaking, does not change overnight. It changes with the parc (number of vehicles on the road). The graph above shows this evolution. By 2030 the traditional business of combustion engines and their related parts will have diminished by 25%. This “slow” evolution will give remanufacturers time to adapt but by 2035 business will already be reduced by 35% which is a level sufficient to instigate business failures.

The future transformation of automotive remanufacturing

Most car manufacturers, apart from Tesla, started the electrification process by installing electric machines (motors) and batteries in the best possible place in their current combustion engine cars. It was clear from the beginning that this was only a compromise and that a completely new architecture was necessary. Later, the OEMs designed new so-called electric platforms which were a much better basis for all their future electrical models. For example, Volkswagen electrified its current Golf model first but later designed a new platform for the recent models ID3 and ID4, and for the future ID1 and ID 5.

This new electric-car architecture works as follows: the flat battery, like a surf board, is located between both axles, giving the vehicle an ideal degree of stability; the electrical machines are installed either on the front or rear axle or on both if the car has two; the electronics, air-conditioning, heating, cooling, loading etc. are either in the front or split between the axis and the boot is usually at the rear but can also be in addition in the front.

The general view is that an electric car is simpler (i.e., fewer components) but I am not sure. I will explain later.

Remanufacturers started working with mostly mechanical parts around 1945-50. Over the years, these were followed by electrical parts and later mechatronic parts. This was still the state of affairs until quite recently. Now, with the advent of electric vehicles, we are entering a new phase which is less mechanical, more electrical - and with more electronics comes a new, serious challenge - software. If remanufacturers want to stay in business, they must start to embrace these new technologies now and not put it off until later. Transforming a business needs a lot of time, great determination, and a sound financial plan.

I said earlier that I do not find electric cars necessarily simpler just because they have fewer components, as many experts pretend. Here is a short list of the components which are necessary to make the car run. Starting with the motor, which we should call the electrical machine, we have three different technologies: permanently excited or externally excited synchronous machines, plus induction machines. There is a gearbox, some one or two speeds, to reduce the high rotation of the machine. Each machine has an electronic converter to convert current from the battery into the proper voltage/frequency for the machines. The converter and the machines are connected to a liquid cooling system, which is part of the air-conditioning and internal heating system. Next, we have the battery loading system, together with the battery management system and, finally, the most expensive item - the battery itself. On top of that, there are many connector switches and cables with different voltages, 400, 800, 48 and 12 volts. Many experts say, for example, that the battery must last for ever but as with brake callipers which must also ‘last for ever’, we remanufacturers know that calliper remanufacturing is big business.

I would love to write more about all these components but that would be beyond the scope of this article, so I will keep something up my sleeve for later. Watch this space!