Where fact and science fiction meet: the future of reman

Developments in additive manufacturing, such as the remarkable uses of 3D printing, are moving out of the lab and into the workplace: Adam Hill asks experts how reman will be able to make of this new technology

Sometimes additive manufacturing (AM) seems like the stuff of fiction. Last month, media reported on the case of Marla Trigwell, a three-year old girl from Newbury in the UK, who was born without her left hand – yet who had a new prosthetic hand printed for her. This would not be out of place in a sci-fi movie, but such life-changing technology is now a remarkable reality. It has been suggested that 3D printing and other forms of AM are already changing the way that the automotive industry manufactures its products. That being the case, does it necessarily make sense that it will have a similar effect on automotive remanufacturing? The technology is truly extraordinary, but barriers such as cost and quality may put it out of reach of many reman operations. By its very nature, there are as yet no real economies of scale in AM. However, it is perhaps wise to refrain from saying ‘never’ when it comes to AM and reman. As Peter Hopkinson, director of the Innovation, Enterprise and Circular Economy MBA at the University of Bradford School of Management, points out, applications for 3D printing have ranged from repairing steel beams cut out of existing buildings, printing teeth, replacing limbs, even the ability to print and construct a house in a day. Given the extraordinary range of uses, it would be a brave commentator who made hard-and-fast statements about future technology that we cannot, perhaps, imagine. “It’s not cost-effective at the moment but it is technologically feasible,” Hopkinson says. “Who knows? Things are moving so fast. If you think about digital technology 20 years ago, people were still thinking about desk top computers as this was before smartphones and iPads. So things may happen with AM in ways that we just can’t envisage at the moment. Maybe it will be used for local fabrication. But it’s certainly happening: it’s moved out of the lab, that’s for sure.”

3D printing has become a sort of shorthand to cover the whole of AM – but of course, there is far more to the technology than that: for example, thermal spraying, cold spray and laser-engineered net shaping. Of these, thermal spray is the oldest form of AM and describes a portfolio of processes utilising a heat source to melt material in a powder or wire form and then spray it onto surfaces at high velocity. Thus it can be used to coat cylinder heads and also for surface restoration. Meanwhile cold spray takes powders and accelerates them at very high speed so that as they hit the surface they deform and adhere to the surface – and since no heat is used, it is good for use with aluminium components. The fused deposition model - the most common form of 3D printing – requires a string of plastic to go through a heater, where it melts and then builds up a surface. Selective laser sintering, on the other hand, uses a laser to sinter powdered material and bind materials together. Although this process is expensive the result is better surface finishes and dimensions. Another process, laser-engineered net shaping, uses a laser beam and a metal powder to build up a surface, resulting in parts with excellent mechanical and fatigue properties. But there are limitations due to a number of factors. “3D metal printing is an expensive process and does require post-processing, either machining or annealing,” says Michael Haselkorn, from the Golisano Institute for Sustainability at Rochester Institute of Technology. “Some reman companies are using 3D plastic printing to make prototype parts that can be used to make moulds or castings used to fabricate metal parts. This process reduces the time and cost to make components that are not readily available.” This pull towards plastics tells its own story. “Metal 3D printing has not taken off,” he suggests. “I don’t think the hype of 3D printing will eclipse regular remanufacturing.”

Part of the reason for this is that most AM processes, including 3D printing, still require the part to be machined prior to use – in short, they are not the answer by themselves. Even if automotive reman is still taking ‘baby steps’ with AM, other industries have moved further on. “AM, particularly for remanufacturing, is mature for many applications now,” says Jason Jones, co-founder & CEO, Hybrid Manufacturing Technologies. “Adding metal onto an existing part for dimensional restoration or part enhancement is being adopted at an accelerating rate around the globe.” Scott Dunham, vice president of research at SmarTech Markets Publishing, believes that aerospace reman currently fits the ‘value proposition’ for AM better than auto reman does. “The issue today is mostly that the aerospace industry as a whole is simply more strategically aligned around metal additive manufacturing technologies than the automotive industry, so they're a bit more ahead of the curve in terms of understanding how to best apply the use of AM systems for reman applications,” Dunham explains. “Remanufacturing of metal components using additive manufacturing is carried out by a sub-process known in the AM industry as directed energy deposition, but in many ways this is an expansion of the concept of laser cladding, which is of course well known outside of AM. These systems are quite expensive in terms of capitalisation costs and require a good bit of expertise to use effectively.” His point is that aerospace companies have clearly rallied around the idea of utilising metal additive manufacturing technologies for the future, while the automotive industry is still grappling with their use. “Auto manufacturers seem to be much more focused on utilisation of polymer and thermoplastic composite additive manufacturing processes than that of metal, at least for today,” he continues. “After all, repairing a multi-million dollar turbine blade housing within a week rather than two months is likely to be of higher strategic consequence than most potential parts in the auto industry.” Having said that, Dunham believes that one area where AM could definitely make sense in the context of the automotive industry is in supporting existing production lines by being able to repair tools used in injection moulding or compression moulding. “We’re seeing much more interest in metal AM technology from auto OEMs and suppliers in producing advanced metal tooling outright using AM,” he confirms.

SmarTech’s work looking at the use of 3D printing and other forms of AM aerospace reman makes useful reading for those in automotive reman. The chart from the firm’s aerospace study relates to the volume of metal 3D printed parts produced by aerospace companies (or supplied to them by service providers) by application type. “We split out remanufactured parts as a category in this specifically,” he says. “We didn't split out reman parts in our auto study because we simply aren't aware of a significant amount of activity in that regard from auto companies. That's not to say it isn't happening, but by comparison it really hasn't taken off yet from what we know. Companies that offer such technologies and services do indeed target the auto industry, but most of our conversations with them inevitably get steered towards aerospace and energy markets because that's where most of their business is at this stage.” Dunham believes this may continue for the foreseeable future. “I suspect use of metal AM for remanufacture in the auto industry will remain a fairly niche area for some time,” he predicts. “There will likely be a few notable companies utilising it to a very effective degree while the majority of the industry takes another two years or so to figure out exactly how and where they are going to implement AM in their production and design strategies.” This means that reman might use AM to hit some short-term, easy targets and use this experience to ponder more advanced approaches. “In this regard, I'm betting pretty heavily that repair of expensive hard tooling is what will drive most of AM-based reman in auto for the next year or so,” he says. 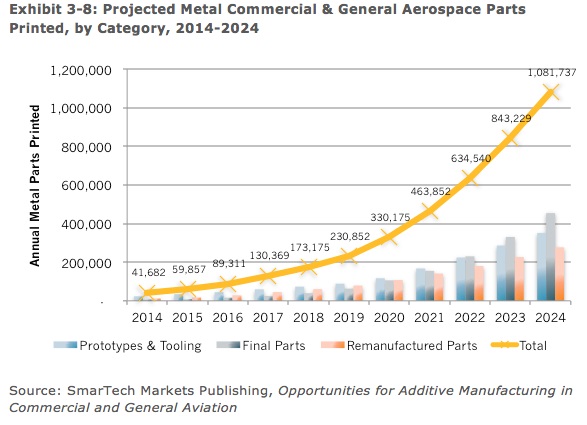 Dunham also sees the likelihood that growth might come, in particular, in assembly tooling, production tools and increasingly functional prototype components, as well as low- to medium-volume production parts in a range of potential materials. Data from SmarTech’s most recent automotive study (dealing with the same metric as the aerospace study) highlights printed part volumes by applicational category. Although reman is not specifically broken out in the figures, the chart does provide some insight into the possible future direction of the industry when it comes to AM”. “Right now, given the pressure for fuel efficiency standards, we believe that mass reduction initiatives in the light vehicle market are going to be the biggest driver for use of 3D printing in automotive production long term,” he explains. “As the industry looks to plastics and composites to reduce mass, AM will no doubt provide a potentially significant benefit. Today that's more on the polymer side, as composite processing capabilities of additive technologies are just beginning to emerge. But with polymers such as polyamides, ABS, and others, AM holds good potential to eventually creep in as a production technology.” As is often the case when it comes to technological developments, he believes this trend is starting at the top of the industry and will work its way into the mainstream. “Several years back we began hearing of end use components having been mostly laser sintered and put into service on race cars and performance automobiles,” he continues. “Today, we're starting to see a trickle down of similar parts being integrated into the real production schedules for low volume light vehicles in the upper echelons of luxury vehicles and sports cars. We expect an eventual trickle down to higher volume models over time.” Dunham is eloquently describing a well-worn path: so while it is true that the automotive reman industry has not yet discovered the full potential of AM, that does not mean that it never will. Examples from other sectors, in particular from aerospace, have obvious differences to reman but perhaps point the way. The future is no longer science fiction – it is science fact. And reman may be beginning to discover that there will be significant advantages to exploring the technology more fully. 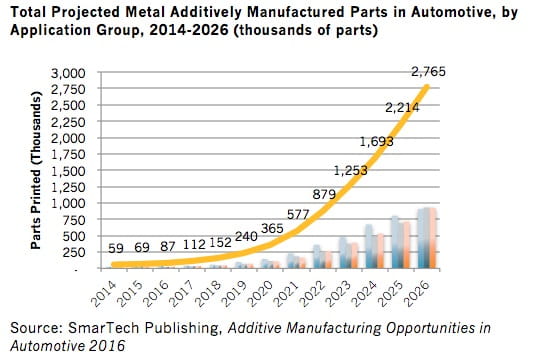