Tunnel boring machine manufacturer Herreknecht has been perfecting the art of remanufacture for the past 20 years. But when it comes to pricing, there’s still some explaining to do, reports Kristina Smith. In the US capital, Washington DC, a series of huge new super sewers will help clean up the Potomac and Anacostia rivers; in Egypt four road tunnels under the Suez Canal are creating new trade routes; in Turin, Italy, extensions to the metro system promise to improve travel times and mobility for residents and visitors. What these, and many more, tunnelling projects have in common is that the tunnel boring machines (TBMs) used to construct them were manufactured by Herrenknecht. And the chances are that these huge, technically complex machines contain parts that have been remanufactured at Herrenknecht’s specialist facility in Kehl, near French Strasbourg and 20km from its headquarters in Schwanau, Germany. “Outside China, two-thirds of our machines are using remanufactured components,” says Olivier Kraft, executive board member, traffic tunnelling, at Herrenknecht. “The chances of finding a completely new TBM are getting smaller and smaller.”

Vital parts
Though Herrenknecht has been remanufacturing TBM parts for 20 years, developments in data acquisition and processing are making the remanufacture process ever-more sophisticated, says Kraft. Data loggers on vital parts provide a detailed history which can be used to make decisions about re-use and possible remanufacture. “Now, not only can we check the operational hours a component has done, we can look at what load has been applied and to what extent, if there have been any overloading or critical situations,” says Kraft. TBM manufacturers have always bought back and re-used parts of their machines, although in the last ten to 15 years, this trend has increased. This is due to larger contract sizes – mega projects which require contractors to pool resource and share risk. Whereas previously a single contractor might have bought a machine and re-used it on the next project, a joint venture contractor needs to dissolve everything at the end of a job, explains Kraft.

There is a difference in appetite for re-used TBMs and parts between developed and developing markets. In western countries, contractors would almost always go for a new or remanufactured machine, purpose-built for the project, to the latest safety standards and with the latest software updates and a full warranty. In other markets, where price has a higher weighting, contractors would consider adapting project designs to existing machines. So refurbished machines are more commonplace. Attitude towards risk and risk management is an important factor too, explains Kraft. “With a remanufactured machine, the responsibility for safety updates is on us. With a refurbishment, the responsibility is shared.”

There is discussion and some disagreement among TBM manufacturers about the difference between a refurbished machine or parts and remanufactured ones. Some of Herrenknecht’s competitors see the ‘remanufacturing’ label as more of a marketing ploy than a technical distinction. 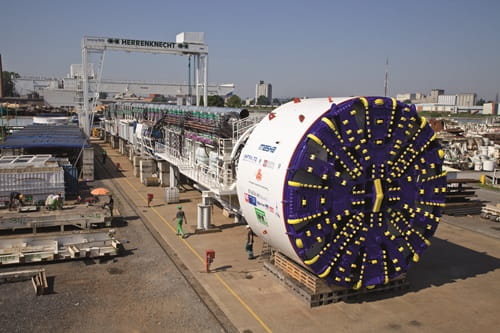 Clear distinction
However, Herrenknecht is quite clear about the distinction between refurbishment and remanufacture: refurbishment allows the part to be used for the rest of its design life whereas remanufacturing re-engineers the part to the beginning of a new life cycle. “The big difference is that with remanufacturing, the machines are specially adapted to the new project challenges,” says Kraft. “With refurbishment, the machine stays the same which means it can cope with similar loads and similar ground conditions.” Herrenknecht and some of its competitors came together to produce a guide on the subject in 2015.

Herrenknecht has had a remanufacturing capability for 20 years. Initially remanufacture took place in a section of the main factory then,ten years ago, it set up the dedicated facility in Kehr, which now employs around 100 people. The standalone plant was needed because remanufacturing requires its own particular skills set, explains Kraft: “The processes are different and the working skills are different. It makes a big difference if you are assembling new components compared to the remanufacturing process. Not everything is different but there is a wide range of different skills.” At the 100,000 m2 plant, over 10,000 components each year are stripped down to their smallest parts, cleaned, measured, inspected and tested and then re-engineered where required. Herrenknecht describes its remanufactured elements as ‘at least as good as new’ and provides full warranties for machines containing reman parts.

‘Experienced components’
In some cases, it may be that the part is even better than new because it is an ‘experienced component’. “When you have a new component, it is always possible for it to fail due to an error in design or manufacturing that has not been detected in the quality checks,” says Kraft. “When it has been used, you know that the component is working well.” Buyers of TBMs – contractors, which are often joint ventures between several construction companies – are always fully aware of which parts are new and which are remanufactured. This is discussed and agreed at the scoping stage, says Kraft.

One challenge for Herrenknecht is that contractors are disappointed at the discount offered on remanufactured parts compared to new ones. Because TBMs are such big beasts, people instinctively assume that the material costs account for a higher proportion of the total cost than they do. “When you buy a TBM for, say, €10 million, there is material within that scope but also engineering, workshop assembly, transportation, first filling, cutter tools, sealings, software updates,” says Kraft. “Often, we have the discussion that the remanufacturing does not offer a discount in the range that they would be expecting. They might be expecting a discount of 50% compared to new equipment.” Kraft won’t say what discount they should expect because it varies from case to case, but 10% would almost certainly be nearer the mark. For the same reasons, contractors may be disappointed with the buy-back value they get for their machines. All those non-material costs also mean that the buy-back price is likely to be 10-15% of the initial purchase price. 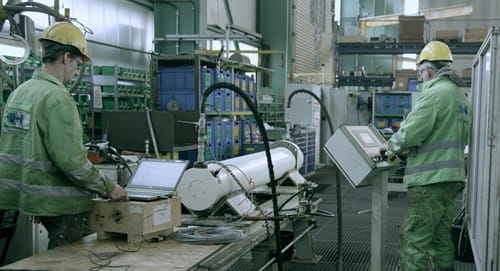 Emerging values
In addition to the discounted price – albeit not as heavily discounted as some would like – and the possibility of increased reliability, remanufactured TBM parts have an additional value in some regions of the world. In northern European countries such as Norway and Sweden, environmental value is starting to move up the priority list for clients. “They are starting to say in the tender that environmental impact should be considered,” says Kraft. “The main focus is still technical and price, but the ecological aspect is getting more important and we expect, in the coming years, that other countries will follow the same way.” Herrenknecht is currently working with some universities to evaluate the savings in CO2 emissions that remanufacture brings. Kraft believes it could be upwards of 90% for a reman component compared to a new one.

Another factor that impacts on the value of remanufactured TBMs is the price of energy and the price of steel – these have been constant, but that could change.“Steel price escalation has been low in the last decade, which isn’t the case if you look back at longer trends,” says Kraft. “The benefit of re-using equipment will increase dramatically once raw materials price starts rising again.” If that happens, Herrenknecht believes it is well-placed to meet demand.