Without doubt electric powertrains are the technology of light vehicles for the immediate future. The long-term future is, however, very difficult to predict because we have to distinguish between several alternatives. We have had so-called hybrid engines for more than ten years but now these have been joined by plug-in full hybrids. In addition, more recently we have seen the introduction of 48-volt mild hybrids which will become widely used in the near future. All these powertrains are half- or partly electric but not fully electric. The only fully electric vehicles are run only by battery or fuel cell.

For remanufacturers of conventional automotive powertrains (combustion engines only) electric motors will represent an important change. A new strategy needs to be developed if remanufacturers wish to stay in business in the long term. The new pure electric cars will develop rapidly over the next 10 years and are expected to reach a 27% share of the European market by 2030. The full hybrid engines, which are “half electrical” will have similar development levels and are expected to reach a 25% European market share by 2030. The latest technology 48-volt or mild hybrid will also develop dramatically over the next 10 years with sales expected to reach 43% of the market by 2030. Mild hybrids have a smaller electric motor used only for power-boosting and recuperating energy.

For European remanufacturers cars already in use will be more relevant than new car registrations. By 2030 we will probably still have approximately 140 million vehicles with a traditional powertrain (combustion engines only) still in use in Europe. But by 2030 the number of electric and full hybrid cars in use will probably reach approximately 25 million vehicles which will result, I believe, in an annual aftermarket service requirement of about 125,000 electric motors. What proportion of it will be remanufactured instead of new, is difficult to say at this juncture. The annual demand for batteries is even more difficult to predict. My speculative view is 450,000 per annum.

Full hybrid and pure electric cars are only one part of the future reman business for electric motors and batteries. Soon to emerge will also be the mild hybrid cars which will also generate high volumes over the coming years, they use 48-volt motors and batteries which perform a similar function to those in full hybrid and electric cars, and as far as remanufacturing is concerned, they are no different in relation to aftermarket and replacement requirements. The estimated volume of these types of cars in use by 2030 will probably amount to about 30 million units - a very attractive number for remanufacturers which, together with the 25 million full hybrid and electric cars, will form the basis of a very appealing reman business. 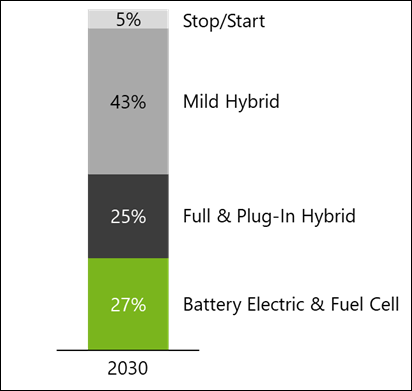 N.B: Combustion engines have many components like camshaft, crankshaft, cylinder head, pitons, bearings etc. and all parts need to be machined and reconditioned. It is labour- intensive but many machines and equipment are necessary. Electric motors, induction or permanent magnet synchronous motors, are much simpler, they consist only of stator, rotor and bearings. Remanufacturing is in principle much easier compared to remanufacturing an internal combustion engine. Changing the bearings is not a problem but the main challenge will be to replace failed windings of the stator or rotor for which processes do not exist yet.

Electric driving motors & Lithium batteries are the newest components which for remanufacturers represent not only a challenge but also an opportunity. The potential for motors is high, see above, but the next most important equipment are the Lithium batteries. For both equipment the reman business will start slow but after 5-7 years it will generate higher volumes allowing for economies of scale. The values of both items are very high which will allow to generate high margins and profits.

Figure 2 The modules of a lithium battery

All OEMs are concerned about how long their batteries will deliver the original performance and what to do if they fail. Models proposing to repurpose batteries for applications such as solar panel systems are not the final solution. The best solution is to remanufacture the batteries. Batteries are not only made of cells but also of controllers, ventilators, relays, cables, connectors etc. which can fail and can be replaced. The biggest challenge and most expensive and complex process is the individual replacement of cells, instead of replacing all the cells with new ones. This is a challenge I believe the manufacturers have not yet fully resolved but I am confident that they will find a solution because in Reman we have always found a solution to component recovery.

The batteries I am showing here are from a project run by the RWTH University of Aachen in Germany. The project is sponsored by the European Union and I am confident that they will find solutions for the reman of batteries. The big advantage for them is that they are indirectly the manufacturer of thousands of delivery vans for the German Post office. They are very close to the operators which is the ideal situation in which research, can test and implement reman solutions.
Looking at the future of automotive remanufacturing other items have a great future too. F. ex. electronics and instruments a business which has been slow over the recent 2012-2019 period, but for the future period of 2020-2025 growth will certainly be much higher.

For other equipment like turbochargers, remanufacturing is very attractive since the number of cars equipped with them is growing substantially on modern vehicles. The reman business will benefit greatly from this evolution. However, the reman process is complex and to remanufacture reliable components is a challenge especially when entering the market. OE manufacturers have long hesitated about starting remanufacturing but this is now history and they will increase the competition.

As a result of the important electrical paradigm shift, and in order to prepare new strategies, remanufacturers must follow the new technical developments closely and start immediately to study and research these new systems and their new components. Short-term production changes are not yet necessary although the changes may come sooner than proposed above.

Finally, other technical changes which remanufacturers must keep a close eye on, are the new driver assistance systems like collision avoidance, emergency braking, lane control, anti-skid control, park assist, intelligent lighting etc. which will lead sooner or later to autonomous driving. Remanufacturers will also be affected by these changes which are already part of current vehicles.