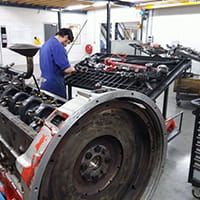 A new technique with potentially far reaching consequences for engine remanufacturers will be presented during the during the international remanufacturing show, Rematec 2015 in Amsterdam, The Netherlands.

Developed by the Dutch company, Koning Technisch Bedrijf (KTB), and presented at the sho’’s InnovationLAB, the method will demonstrate a new way to create a more sustainable European heavy duty fleet.

According to Aart Koning of KTB the simple solution provides great results. "The parts you need to rebuild this engine are readily available. With the remanufactured engine the truck adheres to the stricter European environmental guidelines and in countries like Germany and Poland vehicles are re-certified accordingly." In the Netherlands this is currently not the case,” he explains.

During Rematec 2015, two technicians will remanufacture a DAF WS truck engine, upgrading the engine from its original Euro 0 qualification to the stricter European emission standard of Euro IV or even Euro V. Cylinder heads, fuel pump, injectors, turbo and all parts required for dual fuel injection will be built live on the stand.

Reducing emissions
According to the European Commission, heavy-duty vehicles - trucks and buses - are responsible for about a quarter of CO2 emissions from road transport in the EU and for some 6% of total EU emissions.

Since 1990 the emission of harmful gases has been spectacularly reduced by the introduction of the Euro emission standard. Over the years, the standard has been steadily tightened and as from 2014 all new trucks and lorries are required to be equipped with an engine with Euro VI technology.

Vehicles that don’t comply with the standards cannot be sold in the EU, but new standards do not apply to vehicles already on the roads. According to a rapport of Dutch banking giant ING, in the Netherlands alone almost a third of trucks and lorries still use Euro III engines or older.

Cost savings
As a result of the economic crisis and the quick succession of Euro standards, for many transport firms that own vehicles with older engines, it’s financially not viable to replace their vehicles. Remanufacturing the engine is financially as well as environmentally a solution for these firms. A remanufactured engine also generates diesel fuel savings of around 10%.