The best of the best

The Remanufacturer of the Year Awards are the most prestigious honours in reman. The list of people who have won them is a remarkable roll-call of the industry’s talent – and 2019’s winners continue that proud tradition, writes Adam Hill.

In 2017, in an unprecedented move, the RotY Award was split between two people for their work on international lobbying for the remanufacturing industry: Wabco’s Salvador Munoz Zarate (who sadly passed away earlier this year) and Peter Bartel of C-Eco. In 2018 came the most radical change in RotY’s history: rather than presenting a single award, the decision was taken to split the award into three, to open up RotY to people who might previously have thought it was out of their reach, and to reward companies and people demonstrating a range of skills.

At the opening ceremony of Rematec 2019 in Amsterdam, the RotY awards were handed out by three distinguished former winners. The award for the category Best Reman Process Optimisation was presented by Jens Lindholm, CEO of PowerMaxx. He won the very first RotY Award, back in 2005 while he worked for Holger Christiansen. The award for Best Reman Business Innovation was given by Peter Bartel, engineering director at Circular Economy Solutions. In 2017, Peter won the award jointly with the late Salvador Munoz Zarate, who represented Wabco Reman Solutions. He also said a few moving words about Salvador’s contribution to the industry.

The trophy for Best Reman Ambassador was handed out by Thijs Jasink, chief operating officer at Alec, who was last year’s winner.
As ever, there was some very stiff competition for the trophies this year. Rematec and Rematec News congratulate the winners – and sincerely thank all the companies which made the effort to enter.

Here's the list of 2019's Remanufacturer of the Year Awards.. Knorr-Bremse’s fully-digitalised core return and sorting process satisfies customer and remanufacturing process demands: operators now use touchscreens to identify and sort cores, with 1,500 part numbers handled, in a system which is integrated into SAP with a real-time view of all sorting data and stock. The judges were impressed by a complete process which allows a full track and trace from the customer’s pick-up request, goods receipt and core identification up to surcharge refund booking.

“We are very pleased about this worldwide renowned award: with the RotY Award 2019, the jury has recognised our initiatives in the remanufacturing sector - reman has been firmly embedded in Knorr-Bremse’s aftermarket strategy for the past six years.” -Daniel Koehler, Knorr-Bremse. 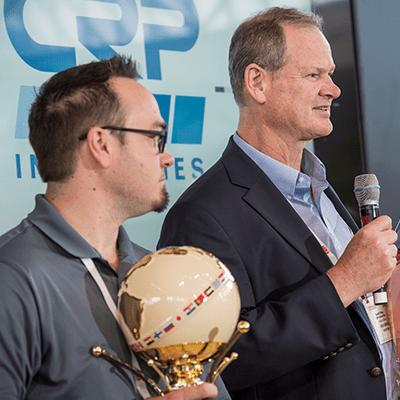 CRP Industries is the parent company of Atlantic Automotive Enterprise, a remanufacturer of electrical power steering systems. Its introduction of lean principles and semi-automation to its supply chain management system - often a challenging task to perform – impressed the judges. These innovations have been implemented in most of the company’s reman process steps and have been shown to have a really positive effect on efficiency, supporting an aggressive EPS launch plan.

“Absolutely this is a big deal: the award came as a complete surprise! We’re not behemoths – our small, family-owned business wins this award. We’ll be able to market what that means for us.” -Scott Shea, CRP Industries. 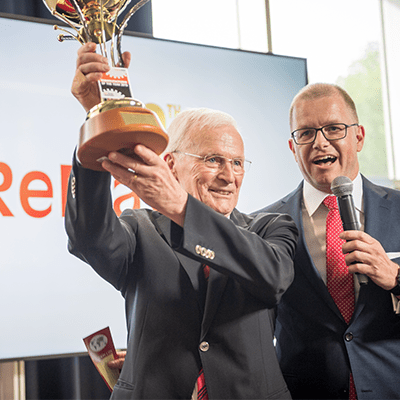 A co-founder of the Rematec exhibition, Fernand Weiland has been in management positions responsible for aftermarket and remanufacturing operations over the last 30 years or so with companies including Bendix, Lucas and TRW. In 1989 he founded APRA’s European division and served as chairman for more than 20 years. From 1990 to 2012 he organised a considerable number of APRA forums, workshops and exhibitions across Europe – and as a consultant he has published many articles and several books on reman. He has worked tirelessly to exchange knowledge and promote remanufacturing to businesses and policymakers – and the industry has no better friend than Fernand.

“It is a great honour for me and a great pleasure to receive this prestigious Rematec award. During my long career I have got a lot of satisfaction from working with the reman family and today is one of the biggest events for me – if not the biggest.” -Fernand Weiland, FJW Consulting.