Although the world looks different in 2020, Rematec and Kemény Boehme & Company (KBC) regard remanufacturing to be an important instrument of after-sales. In the second edition of the exclusive Global Remanufacturing Benchmark (GRB), both organisations have gained insights into remanufacturing trends, developments and challenges. The survey was conducted before and during Rematec Amsterdam (June 2019) and Rematec Asia in Guangzhou, China (October 2019), which allows us to take a closer look at the situation in the European and Asian markets before Covid-19 shook the world. We’ll have a series of articles about industry players and challenges, markets, products and processes, core management, quality and marketing & sales. Today, we start off with part 1: Industry players and challenges.

Most of the industry players surveyed generate less than 25% of the revenue in remanufacturing. About 30% of the respondents states that remanufacturing accounts for the largest part of their revenue (see figure 1). It is striking that the remanufacturing sector of the company surveyed is either small or relatively predominant. 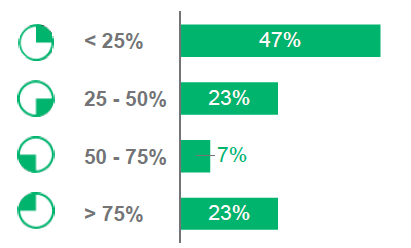 Challenges
The major challenges of the remanufacturing professionals surveyed are characterised by the influence of increasing electromobility and price pressure:

•New technologies are required, particularly as a result of the rapidly increasing electromobility.
•Pricing remains one of the main competition criteria as price pressure in the industry is becoming ever stronger.
•Core management (Tier-n and IAM)
•Consistency of processes such as for core return is a major challenge for representatives of various sectors.
•Marketing and Sales of remanufactured parts as well as a consistent Green Marketing approach is a key success factor.