The value of remanufacturing

By Will Stirling from The Engineer

Caterpillar Inc is recovering 2.2 million products, or 63,000 tonnes, through its Reman programme for remanufacturing parts. And new EPSRC-funded robotics disassembly research could make the case to remanufacture in the UK even stronger, says Will Stirling.

If you run the world’s biggest manufacturer of construction and mining equipment and diesel engines, controlling costs is pretty important. At Caterpillar Inc, 35% of total costs are in overheads and 65% lie in material costs. Which one has the bigger capacity for finding savings, do you think?

Material savings come from reclaiming the value in products with plenty of life left. Since 1973 Caterpillar has developed a sophisticated remanufacturing business model, salvaging materials, remaking parts and offering them with the same warranty as new parts. Caterpillar now offers many products as either a new or “Reman product as standard. About 10% of a typical Cat product like an earth-moving machine can be remanufactured, covering an array of moving parts including transmissions, engines, short and long blocks, pistons, water pumps, oil pumps and cylinder packs. The value tied up in used components is huge, and the $47 billion company has put remanufacturing – or Cat Reman – at the heart of its business.

Unlike refurbishing or recycling a product, Cat Reman uses modern technologies to remanufacture parts to meet original performance specifications, including critical engineering changes. It also operates a “core deposit” incentive scheme. Here the cost of a remanufactured or “core” part matches the cost of a brand new part unless an old part is returned, in which case it is cheaper. The used engine, for example, acts as the deposit and dealers are encouraged to give back the value to the customer when they use the Reman engine. This incentive fuels supply, in that it receives a high percentage of core product back for remanufacture.

“Typically a Reman component costs the customer 75 per cent the cost of a brand new one, and any Reman product has to be as good as the new one with an identical warranty,” says Chris Smith, senior design engineer at Caterpillar in Shrewsbury. The site provides Reman for drivetrains, engines and transmissions and has been remanufacturing on this site since the 1970s, when it was originally Rolls-Royce and then Perkins before Caterpillar acquired Perkins.

Remanufacturing is not a wash down and a coat of paint, it involves breaking the asset down to its core components and rebuilding them to the original specification. This can also involve adding material back to worn parts. “A cylinder head will be stripped down and cleaned, and we would often spray metal on and remachine it to return it to its original tolerances,” says Smith. “When that engine is rebuilt using Reman components it produces the same power and meets the same emissions compliance as the original product. We are not just boring out a cylinder and inserting new pistons,” he adds.

Far from being a niche field practised by one or two greener-minded OEMs, estimates suggest the value of remanufacturing to the UK economy is £2.4 billion, with the potential to increase to £5.6 billion along with the creation of thousands of skilled jobs*. 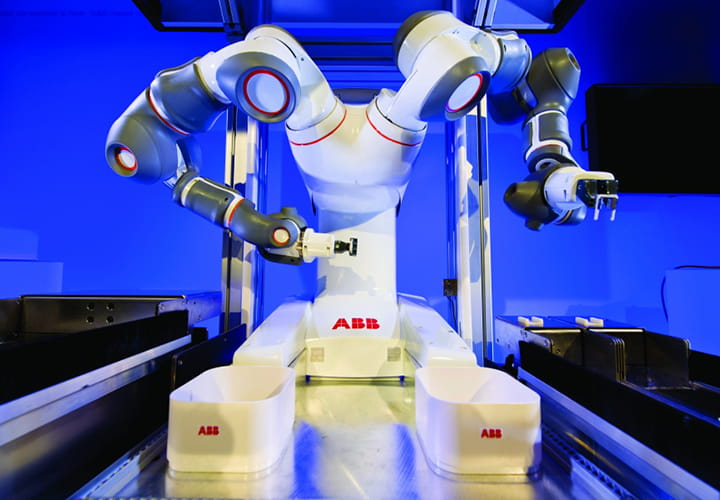 But young people keen to work in the remanufacturing industry need to plan ahead; certain jobs in this sector could be displaced by robots in a few years. That’s what Professor Duc Pham and a team at the University of Birmingham are working towards. In April Prof Pham embarked on a £1.94 million EPSRC-funded, five-year project to research robotic processes for remanufacture, focusing on the most fundamental and potentially difficult stage – disassembly. The project is a world-first, the only one of its kind to explore this approach to robotic disassembly for remanufacture.

“Robotic disassembly has been explored before but in an ad hoc way. Our more scientific approach takes me back to my PhD which investigated robotic assembly – we are reversing that,” says Prof Pham. The approach deconstructs manufacturing into fundamental operations, the most basic of which is “putting a cylindrical peg in a cylindrical hole; inserting a bearing in a shaft, or a shaft into a housing,” says Pham. “We could assume that removing a pin from a hole is a fundamental operation but we don’t take this for granted,” says Pham. “Our team of people are looking at many products and cataloguing all the operations involved, seeing how frequent they are and how these mechanics can be used to help robot actions. Once we understand the fundamentals we can solve problems case-by-case more easily.”

Russians first investigated robotic assembly in the 1960s. Researchers came up with a simple device, the Remote Centre Compliance, or RCC, at the Charles Draper Laboratory at MIT in the 1970s. An RCC derivative device will be applied to this disassembly work. One of the project’s first real product trials is a brake assembly provided by Meritor, the UK division of the US drivetrain, axle and braking company.

The Birmingham University research will devise if and how best a disassembly can be roboticised. “We know there will be operations that are very difficult to roboticise; you can do it but it will cost a lot,” Pham says. Part of the project is to assess how best humans can work with robots in remanufacture, where again cost but also labour availability and suitability are factors.

A big challenge with autonomy in remanufacturing is decision-making. “A water pump can be in a poor condition, the impeller can be pitted or damaged. The operator must decide if the impeller can be reused, remachined or needs scrapping,” says Caterpillar’s Chris Smith. “How can we use visual and monitoring systems to make that decision autonomously and correctly?”. Vision systems are easier to apply to an assembly operation with a known set of components and order of assembly. With disassembly there are more variables. Paint, rust, subjective judgments about scrapping a bolt (low value) to reclaim a block (high value) – could such analysis be left to a robot? Its part of the challenge Prof Pham’s team will attempt to solve.

Now Caterpillar is adopting Reman technology on new products. As part of a fuel injector build process, Cat now uses the Reman process for spraying material onto the pins. “In the field customers started noticing the Reman injectors lasted longer than the new ones because they used a harder coating. This was then introduced to new engine injectors,” says Smith. A huge feedback loop Cat operates between customers, dealers and manufacturing promotes this. Prof Pham’s work with Caterpillar and Meritor is just part of a £2.4bn remanufacturing industry in Britain, which covers products like photocopiers, medical devices, aeroengine components and more. For example, the Manufacturing Technology Centre’s RECLAIM project, which led to the development of one of the first machines that could both add and remove metal within the same machine, was developed for the remanufacture of expensive turbine compressor blades. The MTC has helped advance the concept through its RECLAIM project

The Scottish Institute for Remanufacture (SRI) has grown with industrial partners to accelerate the move to a circular economy in Scotland through product remanufacture, reconditioning, repair and reuse. And SRI is a member, with the Knowledge Transfer Network, Carbon Trust and High Speed Sustainable Manufacturing Institute, of a new Remanufacturing Special Interest Group, with further industry studies active at Cranfield University and the University of Stratchclyde.

But the industry could be worth a lot more, and while the APMG part of Policy Connect puts the potential value at £5.6bn in the UK, remanufacturing is worth far more than this in the US, China and Europe. “The US is very active,” says Pham. “They pass laws to ensure that trucks and cars use a large proportion of remanufactured parts.” Tier one suppliers of electromechanical parts such as generators and alternators have perhaps the most potential for growth, as indicated by Rolf Steinhilper in his seminal 1998 reportRemanufacturing: The Ultimate Form of Recycling, which says that nearly 90% raw material can be saved by remanufacturing. Jaguar Land Rover has chosen not to participate in the robotic disassembly project at this time but, should compelling results at Caterpillar and Meritor follow, the potential for large scale UK remanufacturing especially in automotive, is huge.