This how we're going to elevate remanufacturing

After a long career in reman, Fernand Weiland - creator of APRA Europe and co-founder of ReMaTec – believes that technical innovations will help take the industry to the next level

Reman products are in the aftermarket in permanent competition - mainly - with new products. I suggest there are three levels of penetration or market share. The size of the pie here is not a reflection of the size of the market, it is the proportion of reman of the aftermarket for a given product line.

Level three is 75% penetration of reman products in the market which means making further gains will now become very challenging. At this stage new units, copied new units, basic repairs and used units account for approximately 6 % each. It is difficult to envisage that these alternatives will disappear from the market – but reman may disrupt them.

Elevating reman
Many organisations, research institutes and consulting firms predict that remanufacturing will double or more in size over the next ten years or so. I do not have a problem with that, but my question is - how? I do not pretend to have the only answer but to elevate and grow reman, here are some of the things that are needed.

With no proper engineering there is no reman.

Innovation is the key
All these criteria are important - but my view is that innovation is the most important driver of remanufacturing, and technical innovation is an important element of that. If automotive reman has reached a high level and has displaced the sales of new units, it is because of an innovative concept which was driven by independent remanufacturers and many, but not all, OE companies. It was not done with the support of politicians or other non-market forces.

The most important technical innovative criteria have been, and still are:

There are already many innovative examples in projects which are in line with the objective to elevate reman – and many others are showing remanufacturers that innovation is rewarding and beneficial to the whole industry.

Thermal plasma spray
When it comes to improving recovering or reclaiming rates, automotive combustion engine technology is moving to more compact and lighter engine blocks which are increasingly difficult to reclaim. This is defeating the objective of reman. Due to the limited amount of material available in the cylinders - and between the cylinders - the capability to reuse or remanufacture these blocks with traditional techniques such as boring oversized and using larger pistons or fitting cylinder liners – is likewise limited.

To resolve the problem, new processes such as thermal plasma spray have been developed. This consists of machining/removing a small amount of metal from the cylinder bore and replacing it by spraying molten metal in a rotary motion down the bore. This sounds simple but in actual fact it is a complex process which needs a lot of skill. Autocraft, an independent remanufacturer, has made this high-tech investment and has now substantial experience with the process. They are working for OEMs but can also work for independent remanufacturers – so congratulations to Autocraft. BMW, Daimler and other OEMs also use similar processes.

Greater efficiency
To elevate reman to higher levels, one way is to improve and make remanufacturing processes more efficient. Remanufacturing starts with the damage-free return of old units, their accurate identification and proper stocking.

Budweg, a leading remanufacturer of calipers, has invested and created a very efficient system. It scans the original sticker of the box, most of the time the pertaining unit is in the box, but to be certain that the unit is the correct one, they display all the data including a picture on a screen and attach to the unit a tag with the core stocking bin. Their high stocking shelves move up and down like an elevator or pater noster.

This stocking system is ideal for calipers, giving fast access and high compactness. 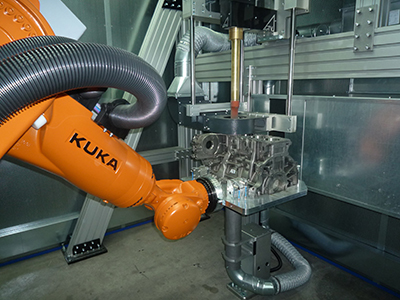 Human-robot collaboration
A key step in remanufacturing is the disassembling of the old units. In most companies, this is loud, dirty, hard work – not something which many workers would like to do. Whatever we might think about robots in reman, it will be difficult to argue against making this area more worker-friendly. To robotise the assembling of new units is relatively easy - but to robotise disassembling is a tough job. That is the reason why many have either given it up – or not touched on it at all. We are grateful that we have universities which have taken up the challenge. The UK’s University in Birmingham, for instance, is working with Caterpillar and Meritor to dismantle water pumps used in combustion engines. The project started last year and I believe it will take a few years to arrive at final conclusions and results.

We remanufacturers are lucky to have a second academic institution researching the disassembly of products by human-robot collaboration. This one is financed by the European Union and conducted by Professor Wolfgang Gerke of the Trier University of Applied Sciences in Germany, in conjunction with SEW Eurodrive, a German manufacturer of electrical gear motors (see Brave New World, p23). Until recently robots were heavy, strong and not flexible – but these days they are becoming lighter, more forgiving and more sensitive. In other words, they are more suited for disassembling smaller products like automotive components. Professor Gerke told me that the use of robot-based assistants is a compromise between automation and manual labour. One advantage is that only human beings have the ability to identify and handle unexpected situations like parts being damaged or manipulated – and can adapt the process accordingly. The robot, meanwhile, can provide assistance with power and endurance over the complete disassembly process and thereby improve the ergonomics of the workplace.

Key competencies
When it comes to reman innovation, we are now looking not only at higher recovery rates - in other words recuperating or rescuing units which otherwise must be replaced by new - but also at redesigning and upgrading units.

Take the example of a controller or manipulator of a robot, for which the manufacturer is not supplying repair components. Remanufacturers can do the job – and they have, with processes designed and created by Professor Rolf Steinhilper of Bayreuth University and later implemented, produced and distributed successfully by Robotif, a German company which remanufactures robots.

This is, for me, a perfect example demonstrating the key competencies of a remanufacturer:

Elevating reman is going to require technical innovation – and remanufacturers are already rising to the challenge.

This is an edited version of a presentation given at the opening of Alec’s new facility in Munich, Germany.