It's a family affair

Autoenterprises is one of the best-known core suppliers in the reman business: Adam Hill talks to boss John Collins about expansion, Brexit – and why his wife and children are behind his success.

The last time Rematec News visited Autoenterprises, it was 2007. A lot can change in ten years – but one very important thing remains the same. The company’s work forms the bedrock on which all of remanufacturing is based: it is one of the best-known core suppliers in the business. The company has two sets of buyers on the road in the UK full-time but founder John Collins explains the company sources cores “from all over the world” via its HQ in Basildon, east of London. Scrap merchants, salvage yards, garages and dealers are the obvious haunts. “You can buy by the kilo but we prefer to buy by the piece,” he says. “I only buy what I want.” Collins seems to have always known what he wants.

The history of Autoenterprises can be traced back all the way to 1978. That was when he began his first job, as a Saturday boy at a car parts shop in the shadow of West Ham United’s football stadium, Upton Park, selling reman starters and alternators among other things. “My first job was to empty the old unit bins,” he recalls fondly. “I remember taking out old brake shoes into one box and clutches in another. I got £3.50 a day!” His son (also called John) is sitting beside him and laughs: “I’ve heard that story many a time!” Collins senior continues: “It was the best apprenticeship I could have had. I saw both sides of the counter. I’ve always said that if you treat everyone how you want to be treated then you won’t go wrong.”

Chance encounter
This philosophy has kept him in good stead. Collins left school at 15 to set up on his own – and by the age of 22 he had done well enough to go back and buy the very shop in West Ham where he started. Business was good enough to allow him to open three parts shops in the end – but it wasn’t until the late 1990s that he spotted the opportunities that becoming a core dealer could offer. Although he was selling such items as spark plugs and oil, a chance encounter with a customer having his Nissan serviced at a nearby dealership led Collins to see that selling cores would be more profitable - specifically as he had a knack for identifying things.

Collins had a large sign in the shop window (‘We buy old starters and alternators’) as he was rebuilding his own in the workshop at the rear of the premises. “I was standing in the shop doorway,” he recalls. “It was a bit quiet.” They struck up a conversation about starters and alternators and the customer then asked Collins: “How much do you give for an A127?” “Three quid,” said Collins. “Oh, I get eight quid for them,” the customer said. A lightbulb was switched on for Collins, who immediately started buying more old starters and alternators – and getting paid £8 for each of them. “I thought: ‘I like this game!’” he laughs. “Eventually the cores business became bigger than the shops.” 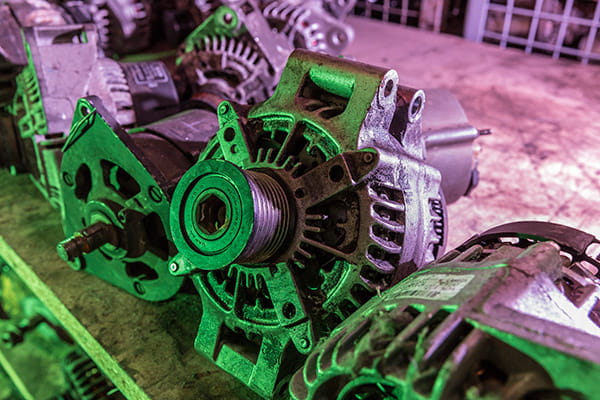 Logical step
The next logical step was to sell the shops and concentrate on the area which made most money – and he has not looked back. Not that it has been easy: “It’s not like core suppliers of old, where they’d throw it on the back of a truck and sell everything. These days everything has to have a number.” When Autoenterprises started, Collins quickly realised that some items are more profitable than others. “Everyone was doing starters and alternators,” he recalls. “We decided that we’d got to make our mark and it would be with calipers.” This did not come easy. “I remember sitting in the old office with a box of calipers, thinking ‘how am I going to sort these out?’” And how did he sort them out? “I persevered, and I persevered, and I persevered with them,” he laughs. Calipers remain the company’s biggest line, accounting for around 600,000 of a stockholding of more than a million units overall. Every part – from engines to turbos, and from AC compressors to diesel pumps - has its own unique number on a bespoke database.

It is no surprise that Collins believes strongly in the importance of professionalism. “The core supplier has been looked at as a second-class citizen – but we run a ship that’s better than some remanufacturers,” Collins says. He adds that Autoenterprises is the only core supplier in Europe to be ISO9001 credited. And in 2008 he even went back into the starters and alternators market. “To be a full-line core supplier you’ve got to do as many products as possible,” he shrugs. Collins has always been involved in the automotive industry in some way. His father was a panel beater and sprayer, and both parents instilled in him the need to work hard. “I had a drive to succeed, I suppose,” he muses. “I always had a good work ethic. I was never allowed to lay in bed at home. And I’ve never asked anyone to do something that I don’t do myself.” This may be why he has never stopped looking for new avenues to explore, and is not afraid to cover niche areas such as classic core parts and specialist American engines. Autoenterprises is currently looking at another 20,000 sq ft building close to its HQ for housing more stock - on top of the existing 80,000 sq ft plus a 20,000 sq ft facility specialising in driveshafts in Durham, north-east England.

The Brexit dilemma
The UK’s vote last June to leave the European Union has created another layer of economic uncertainty – but also potential opportunity. Collins is relaxed. “Brexit will work itself out – it’s not all of a sudden going to go ‘bang!’ We can still do tremendous business with Europe. Both sides would be stupid to put barriers up between us. It will work itself out.” But Brexit has certainly got Collins thinking: if cross-border trading becomes more complex, the company may need to open a facility in continental Europe to continue servicing its European customers.

With Basildon close to Stansted and Southend airports, it may make sense to locate in central or even eastern Europe, he thinks. “Personally I think it will all pan out, but if that has to happen, then we’ll do it.” Away from Europe, the US is itself going through interesting times politically, with new president Donald Trump on a mission to shake things up. Collins sees opportunities here, and smiles: “If our friend Mr. Trump puts levies on cheap Chinese imports then the reman industry will explode! Rebuilding suppliers like us with large stocks are going to have a field day.” 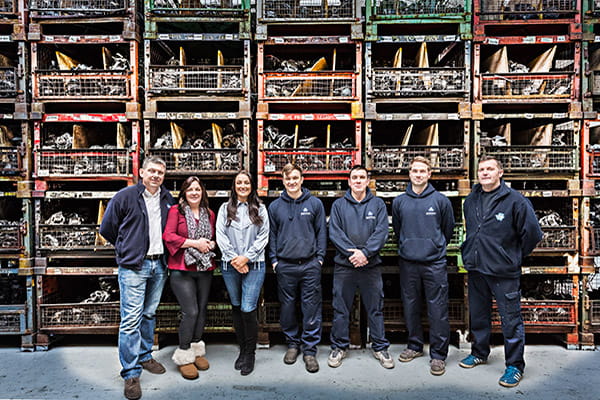 A family affair
While Collins is more than happy talking about international matters, his real interest is closer to home. He has always insisted that Autoenterprises is, at heart, a family affair. His wife Dawn, daughter Francesca and sons John and Ross work with Collins at Basildon, as do Dawn’s sister Andrea and her husband Mark. “They’ve contributed a lot to this company along with a few key personnel and a great workforce,” Collins says.

Indeed, throughout his chat with ReMaTecNews he insists – just as he did in the 2007 interview - that he must not take all the credit for the firm’s success. “The hardest thing in the world is to delegate,” he acknowledges. “It took me a long time to learn that you’ve got to put your faith in other people. They will do some things better than I do. We all know our jobs here: we grab hold of it and get on with it.” Responsibilities have been split into five main areas: calipers, electrics, driveshafts, steering and a final category is grouped as turbo, aircon and diesel. They are run as distinct – although not separate – entities, he explains. “I know what everyone’s doing. They all talk to each other and it is run as a team.” He says he is now in the process of taking more of a back seat in the business – although it should be pointed out that Collins’ idea of a holiday is a two-week break, with a week of visiting other core contacts in the middle. “Yes, I take working holidays,” he says. “Maybe a trade show, or a buying trip. But I take my wife.”

Growing marketplace
There is even some talk of a five-year plan which will see him move into the background of Autoenterprises. “I went into semi-retirement mode last year,” he claims. “But then it got busier and I ended up working more hours than I did when I was full-time! This industry is a growing marketplace. Every time you think you’ve reached a peak, it just keeps going. But I want to emphasise that it’s due mainly to the people we’ve got here, pushing all the time. We want to make sure the customer is happy: we’re not fly-by-night, we’re here for the long term.” Still, it seems that he is (at least partly) relaxing his control of the business and increasingly handing over to the next generation. “I’ll watch from a distance. I’ve said: ‘If you don’t get on with it, I’m coming back!’”

They have been warned. It is ten years since ReMaTecNews last visited Autoenterprises – and to be honest you would not bet against Collins still being involved day-to-day in ten years’ time. And there is another thing that probably won’t have changed by then – the need for more space. Autoenterprises is a company that has needed to expand virtually from day one. “I don’t throw anything away,” Collins admits. “You can bet your life that as soon as you’ve scrapped it, someone will want it. We buy a lot of material that’s not on people’s lists – we’re a proper stockist – for the next day, and the next day. We might hold calipers for ten years – in fact, some calipers might have been here ever since we started out. We can’t find them in breakers’ yards anymore.” So customers drive the business, and in effect they are the ones who demand expansion. “It’s like a rollercoaster. I’m trying to slow down but it won’t let me,” he concludes. It must be said that Collins does not seem entirely unhappy about this.

1999 Sells his (by now) three spares shops to start up Autoenterprises, taking a 3,000 sq ft warehouse at Rainham

2017 Autoenterprises stocks one million cores and has 100,000 sq ft of warehousing